All bellows have a critical pressure at which they become unstable. Instability can occur in either of two modes, column instability (or squirm), or in-plane deformation of the convolution side wall. Squirm affects the bellows as Column instability (or squirm), is the phenomena whereby the centerline of straight bellows develops a sideways or lateral bow while in-plane deformation only affects one or more convolutes individually. 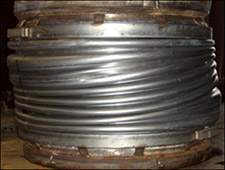 The critical pressure at which this instability occurs is a direct function of the diameter and spring rate, and an inverse function of the length. If the bellows are bent, or angulated, the centerline can begin to move away from the center of curvature.

In each case, the effective length of the bellows increases, lowering the material available to withstand the pressure, thereby increasing the hoop stresses. As the length increases, the tendency to squirm increases and the stresses become higher and higher until a catastrophic failure occurs.

A simple way to visualize these phenomena is to remember that the bellows are a cylinder of a given volume. Internal pressure tries to increase a vessel’s volume. Since a bellows is flexible in the axial direction, it can increase its volume by increasing the length of its centerline. With the ends fixed, it does so by simulating the appearance of a buckling column.

We perform standard pressure tests on all our bellows to ensure the unit will not squirm in service. Tests are not mandatory by EJMA, but it is highly recommended to perform pressure or hydrostatic test prior to service.